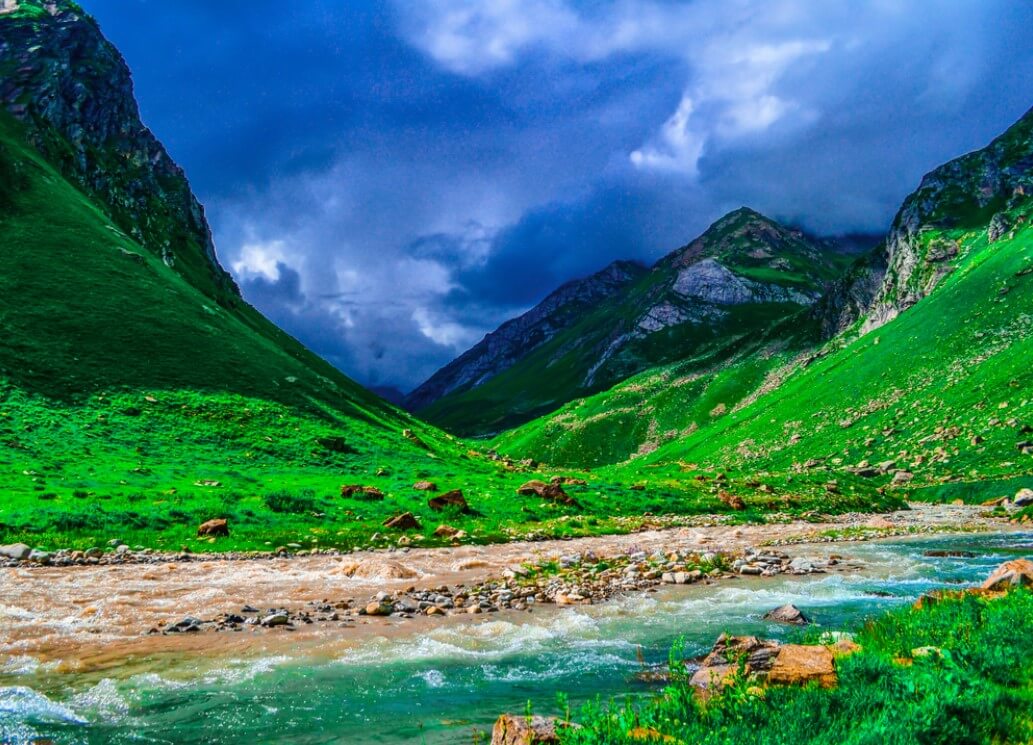 Neelum Valley & District is located in the northernmost district of Azad Kashmir, Pakistan. As of 2017, the community has a population of 1,91,000 by taking up the larger Valley part. The total area of the Neelum district is about 3,621 KM2. It is made up of mainly two Tehsils: Athmuqam & Sharda. Athmuqam is the headquarters of the Neelum district.

The ranging of elevation of the Valley is around 4,000 to 7,500 feet. The mountain peaks on either side reaching up to 17,000 feet high. The Valley is about 144 Kilometers long. The Valley was part of Muzaffarabad District until 2005.

Several languages are spoken natively in the Valley, but Hindko is the most preferable and widely spoken language. Famous for its weather, greenery, and location, there are many places to visit as a tourist or traveler in Valley. Some of them are Arang Kel, Chitta Katha Lake, Dhani Waterfall, Jagran, Kel, Sharda, Kutton, and Athmuqam.

The Valley consists of many sub-valleys as well –

Famous for its weather, greenery, and location, there are many places to visit as a tourist or traveler in the Valley – Places to Visit In Neelum Valley.

Arang Kel is a village and a tourist spot. It is located in the Neelum District of Azad Kashmir, Pakistan. The town Arang Kel is situated at the height of approximately 8,379 feet. Famous for its nature, Arang Kel is 2 Kilometer far from Kel. A chairlift administered by Pakistan Army is used to reach Arang Kel from Kel.

Kel is located in Valley, Azad Kashmir, Pakistan. Famous for its highest mountains, there are dozens of mountain peaks, including Sar Wali Peak, which is about 20,000 feet tall. Kel is also renowned for its lakes.

There are approximately 200+ lakes in Kel. Most tourists and travelers have experienced seeing Brown Bears, Tigers, and sometimes Snow Leopards in Kel. Many wild animals also can be seen in Kel.

Hindko, Kashmiri, and Urdu are the most spoken native languages in Kel. Anyone can travel between Kel and Muzaffarabad by bus service daily.

Athmuqam is a town located in Neelum District, Azad Kashmir, Pakistan. It is also known as Athmakam. The city is located about 73 Kilometers far from Muzaffarabad. Having a population of more than 20,000+, it is the headquarters of the Neelum Valley.

AJK University is located in Athmuqam with having Computer, Science, English, and Geology Departments. Athmuqam is fully facilitated with hospitals, banks, supermarkets, guest houses, and a post office.

Many hotels in Athmuqam, ranging from high-end to budget, can you a comfortable experience in Athmuqam.

Sharda is a small town located in Neelum district, Neelum Valley, Pakistan. Sharda is also known as Shardi. The most spoken language in Sharda is Urdu. The name Sharda derives from the word of Hindu goddess Maa Saraswati.

It is one of the two tehsils of the Neelum District. Located on the banks of the Neelum River. Famous for its nature, views, and sceneries, tourists & travelers can also enjoy boating and skiing in Sharda.

There are many places to visit in Sharda, such as Sharda Temple, Kishan Ghatti, Surgan, and Maidaan.

Kutton is a village located in the Valley of Azad Kashmir, Pakistan. It is located about 98 Kilometers from Muzaffarabad. Famous for its views, weather, locations, and resorts. One can visit Kutton by Neelum Road from Muzaffarabad.

There are many rest houses and hotels to stay in in Kutton Village. It is located at an elevation of 4,800 feet. Urdu is the most spoken language in Kutton, Pakistan.

ABOUT US
“Sajmash.com” is a website that has a mission to inspire people to spend quality time on your next holiday. Our mission is to increase travel not only to and within Pakistan but also across the world. The website was founded in 2020, and We have guided lots of people to enjoy their holidays and travel till now.
Contact us: [email protected]
FOLLOW US
© 2020 - 2022 www.sajmash.com - All Rights Reserved